Be Determined to Fight With Your Own Fire 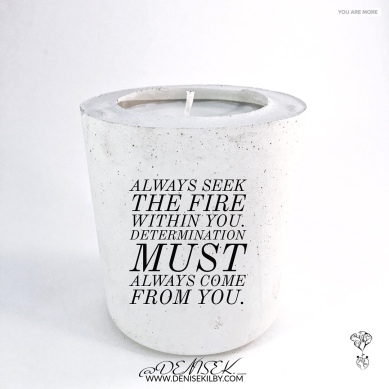 We can look at many people for inspiration but determination to fight for what we want must always come from us!

Last night while watching #sharkattack I heard one of the researchers talk about how “humans have no predators, or that at least that’s what they say” and found themselves in a high disbelief of the saying after seeing sharks attack people as if they were preying on them and attacking to actually eat them.

“Humans are normally not a prey of sharks, is simple as that-we’re not on the menu, sharks don’t like the taste of humans”. (They prefer fish or 😉 sea food).

Looking for factors which could have caused the shark (the predator) to have come in contact with the swimmers the team of research discovered that the population dynamics was a factor, the more people there was the more prone they were to being attacked, (kind of like when you go to church– the devil does not attack an empty church or a person who doesn’t go to church). Also, tourists (this could be the new born Christians, new converted Christian’s, young people who still need guidance or even those who have done astray) were feeding the small reef fish that they were seeing, and that exact action was attracting the shark to the area (this is bringing revelation) like when one of our our children or family member starts listening to music that we don’t like or doing things that are not God pleasing but are pleasing to the enemy then without noticing we begin to accept these behaviors or other adults have already done so and the they bring the attack without noticing (which is what happened here).

The water temperature were hotter than usual this time of year, revealing that this have a direct effect in the shark metabolism which means their need for food increases which means they can become very aggressive meaning they want to feed. In one of the shark’s autopsy the liver was very small meaning the maco was very hungry which is unusual.

There was still something missing, why were they still being attacked and multiple times even though they didn’t;t like the taste? The wounds where in the same area, limbs, hands, buttocks and legs.

Evidence revealed that illegally divers were feeding the sharks some fish from a fenny pack, for more than a year as if they were teaching them tricks. It appears as if the sharks behaviors had been previously conditioned by different stimuli. Therefore, seeing humans, arms, legs, butts, and limbs move remind these sharks of feeding or preying  (the stimuli, these sharks had been trained) to expect food from humans or even killed.

It was like a scene from Jaw in the Red Sea of Egypt. As soon as I heard them say that something made sense (instantly 1 Peter 5:8) came to my heart and I felt compelled to share with you. “Be alert and of sober mind. Your enemy the devil prowls around like a roaring lion looking for someone to devour”.

I don’t think anyone is physically ready for a shark attack. But we can all be spiritually, mentally, and soulful ready. How much heat can you withstand will depend on how much fire you have within your own soul. Your spirit can be renewed at any given moment. Perhaps your spirit is in a good place rights now and your soul is beaten to death. But living a soulless life, however, is one of the most miserable things that can happen to anyone. Is being alive and not living.

Take time to reinvent who you are learn from every experience and be sensitive to the spirit of God. Pursue your calling.

“The difficult people are our most valuable teachers”

What have you learned lately?

Humans do have a predator—whether you want to believe it or not. A question remains, are you ready for when he comes to attack? Is your candle light?